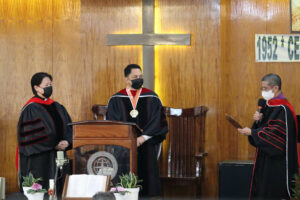 The Very Revd. Dr. Gloria D. Mapangdol, president and dean of Saint Andrews Theological Seminary (SATS) spoke at the opening convocation of PBTS held on June 28, 2022 at the PBTS Chapel A.

Comparing multiple readings of both the Babel story and that of the Pentecost, she proposed that instead of seeing contrasts, one can actually find similarities. Both stories begin with isolation, diversification, then ending with a scattering. Both stories, are actions of critique against those in power who maintain homogeneity, in order to enforce subjugation with ease. Likewise, both stories sees the differences in language as God’s gift of diversity.

Mapangdol said“We see God’s act of confusing the language and scattering both in the Babel and Pentecost story, no longer as punishments but as part of God’s grace…God reverses the human movement toward homegeneity to the reaffirmation of the cultural, linguistic, geographical, and other diversities.”

Mapangdol continued, “The coming of the Holy Spirit again, is seen as an inclusion of these people of the ‘non-beings’ in God’s plan. This inclusiveness of God’s mission was reinforced to the disciples. After all, this was what their Master Jesus, exemplified in his ministry.”

Dr. Mapangdol serves as president and dean of SATS under the Episcopal Church in the Philippines.

No comments to show.